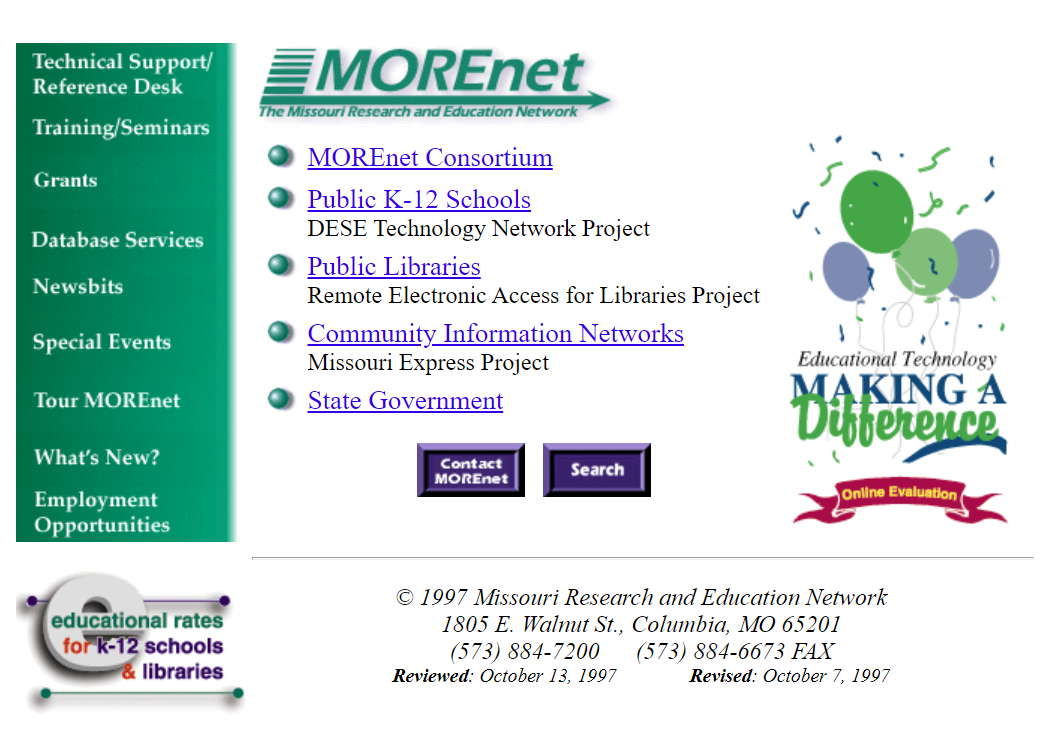 Reflecting on 30 Years: The Evolution of www.more.net

MOREnet first began operations in 1991, before the World Wide Web became popular, but it didn’t take long before we had joined the movement with a website of our own. There have been at least five different versions of our website, using systems that have ranged from static HTML to the content management systems in wide use today. Courtesy of the WayBack Machine, we thought you’d enjoy the trip down memory lane as we look back on www.more.net through the years.

The earliest version of our website, from 1997, was a basic static HTML site with a few links for our members and the standard contact and search links. 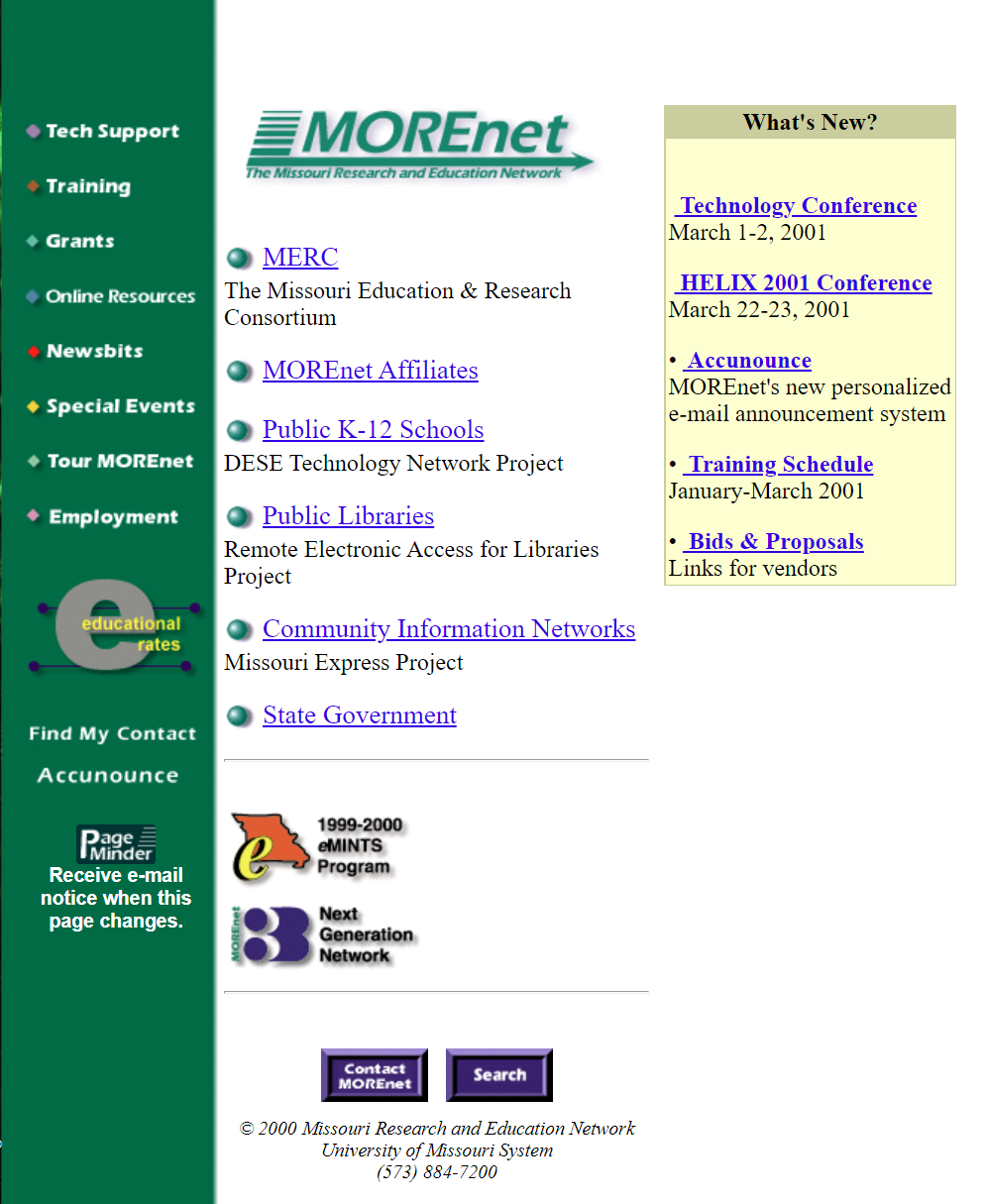 The site in 2000 looks much the same, with a link for information directed at each member type. We moved “What’s New?” from the left navigation column to a callout box on the right, likely because web traffic showed us members wanted to find the new information quickly. You can see by the content in that box, strengthening the human network through collaboration and events has always been a staple of the MOREnet Consortium.

At the bottom of the page, you’ll see links to eMINTS and the Next Generation Network. eMINTS began as a MOREnet initiative, then as it began to expand into other states and countries, was transitioned into MU's College of Education and we're thrilled that a strong collaboration and partnership with eMINTS continues still today. Next Generation Network, which was a cooperative effort between MOREnet and the University of Missouri to stabilize costs while increasing bandwidth.

In 2002, the site underwent a major redesign along with a rebranding effort that included a different logo and a slight change in color palette. 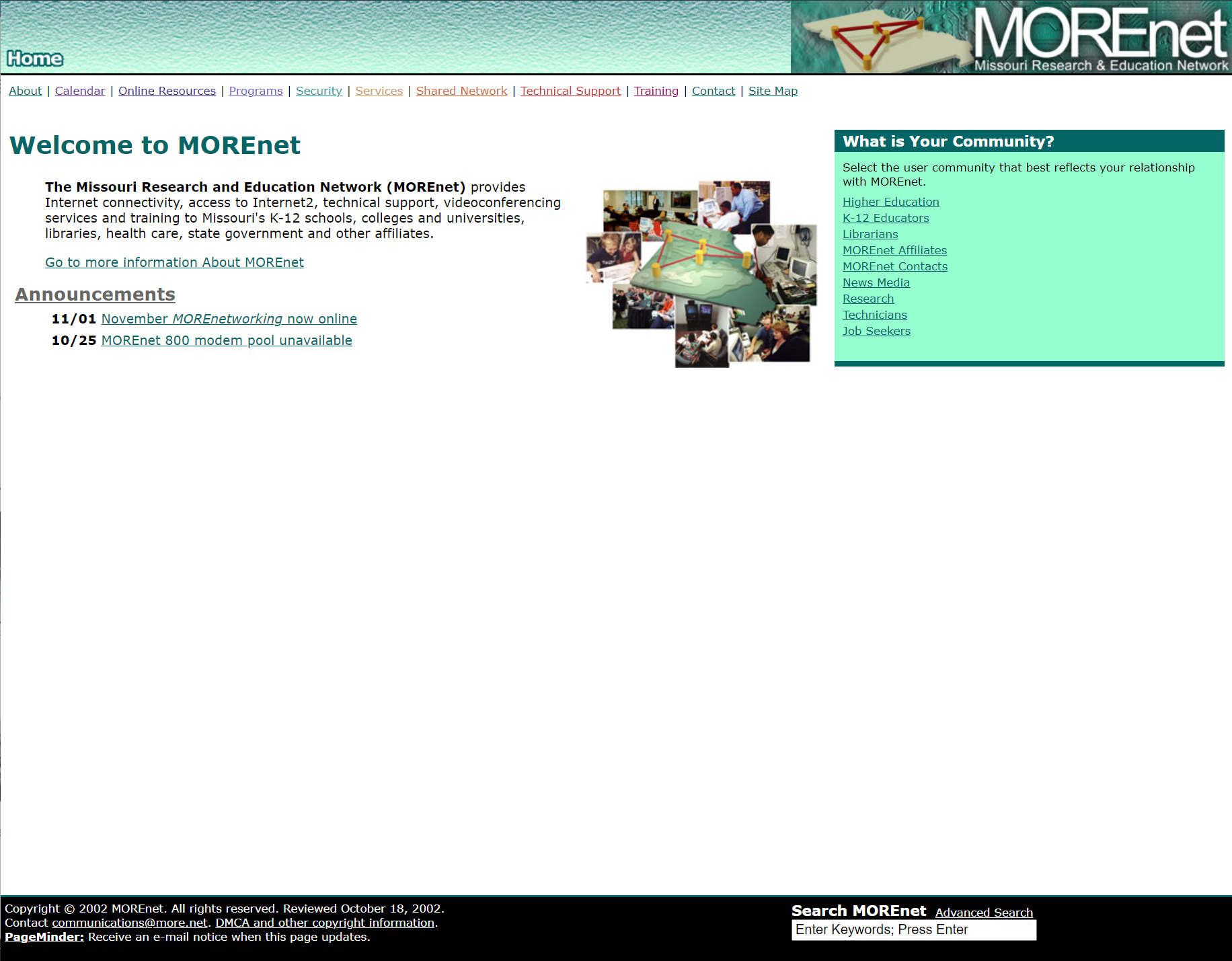 This newer site remained static HTML but used a few simple tricks like server side includes to ease maintenance and management of the content, as it had grown quite large with several hundred pages. During the redesign, much of the content from the old site moved directly to the new site, but we also created a number of communities to give users a different way to find information. The community pages were curated by program or interest area and were intended to gather everything someone in, for example, higher education, would want to see. 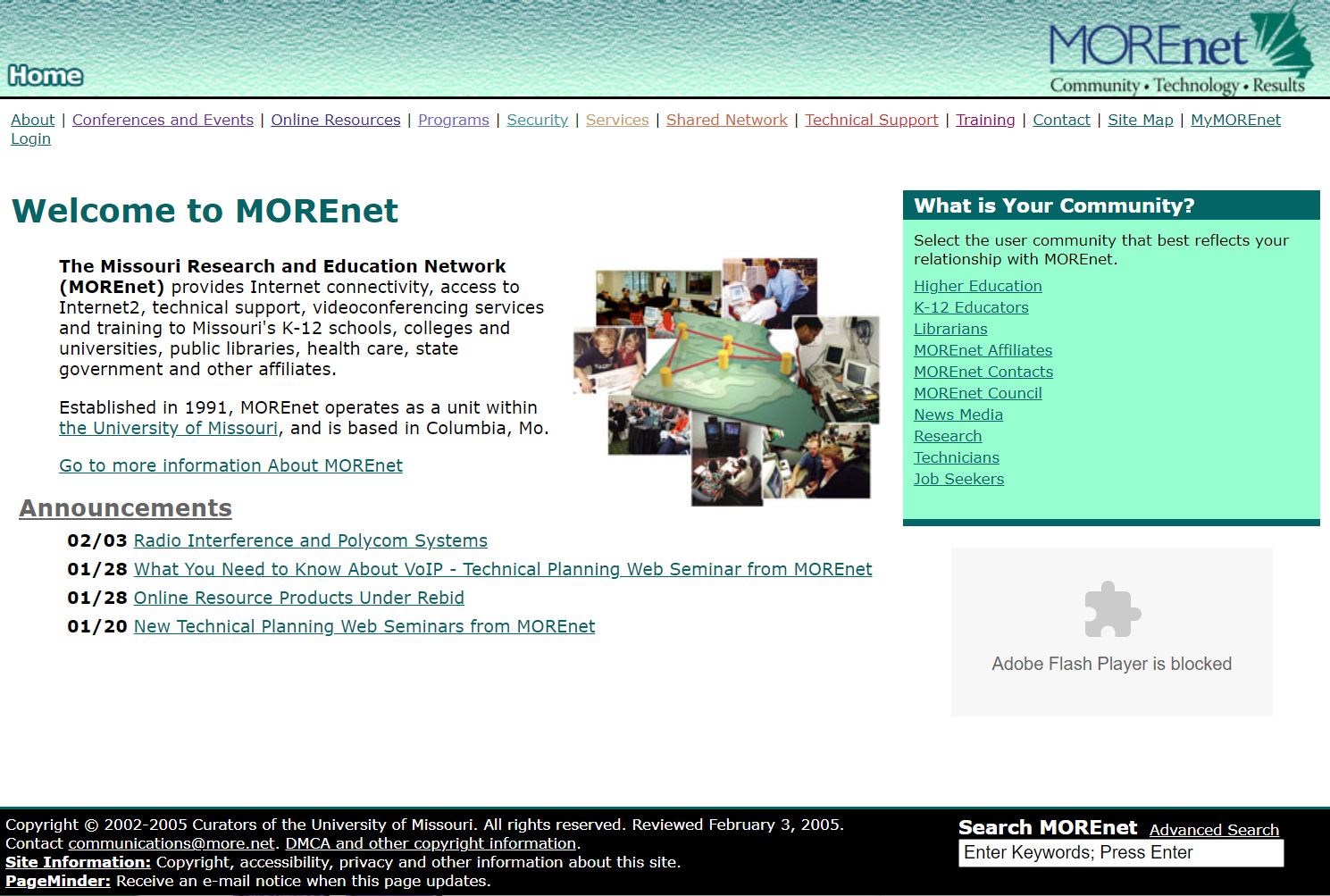 The site in 2005 was mostly the same as 2002 but with a few additional links in the navigation and a different logo. 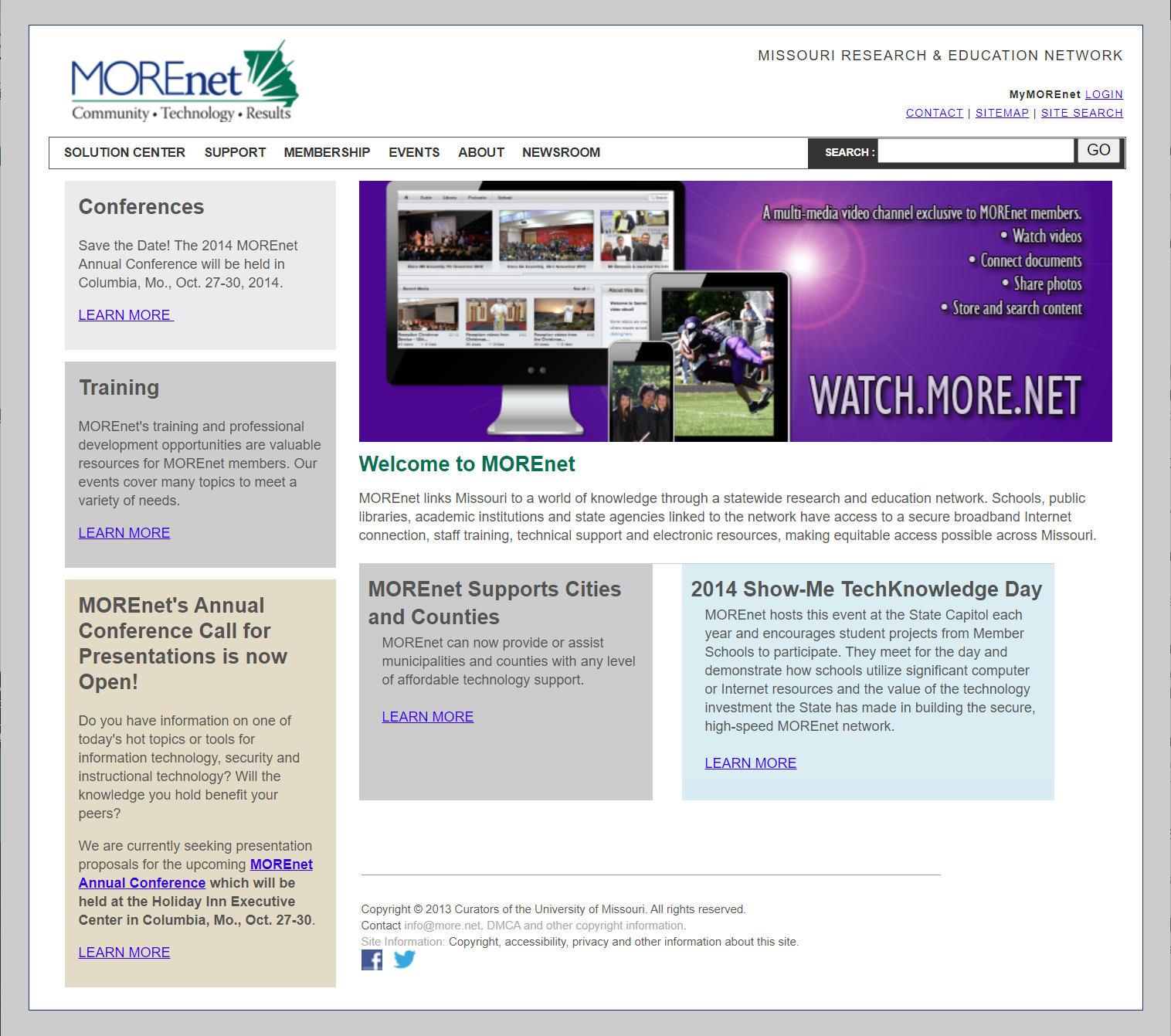 In 2009, the site’s third major redesign saw it move from a static HTML site to Drupal 6, a popular content management system. The logo remained, but we got more creative with the color palette, and we started using more photos in our graphics. The move to Drupal eased maintaining the site, as many pages were entirely or partially dynamically generated from a database. The new site also substantially revised its organization, reducing the number of top-level navigation in favor of more general user-focused categories of content. 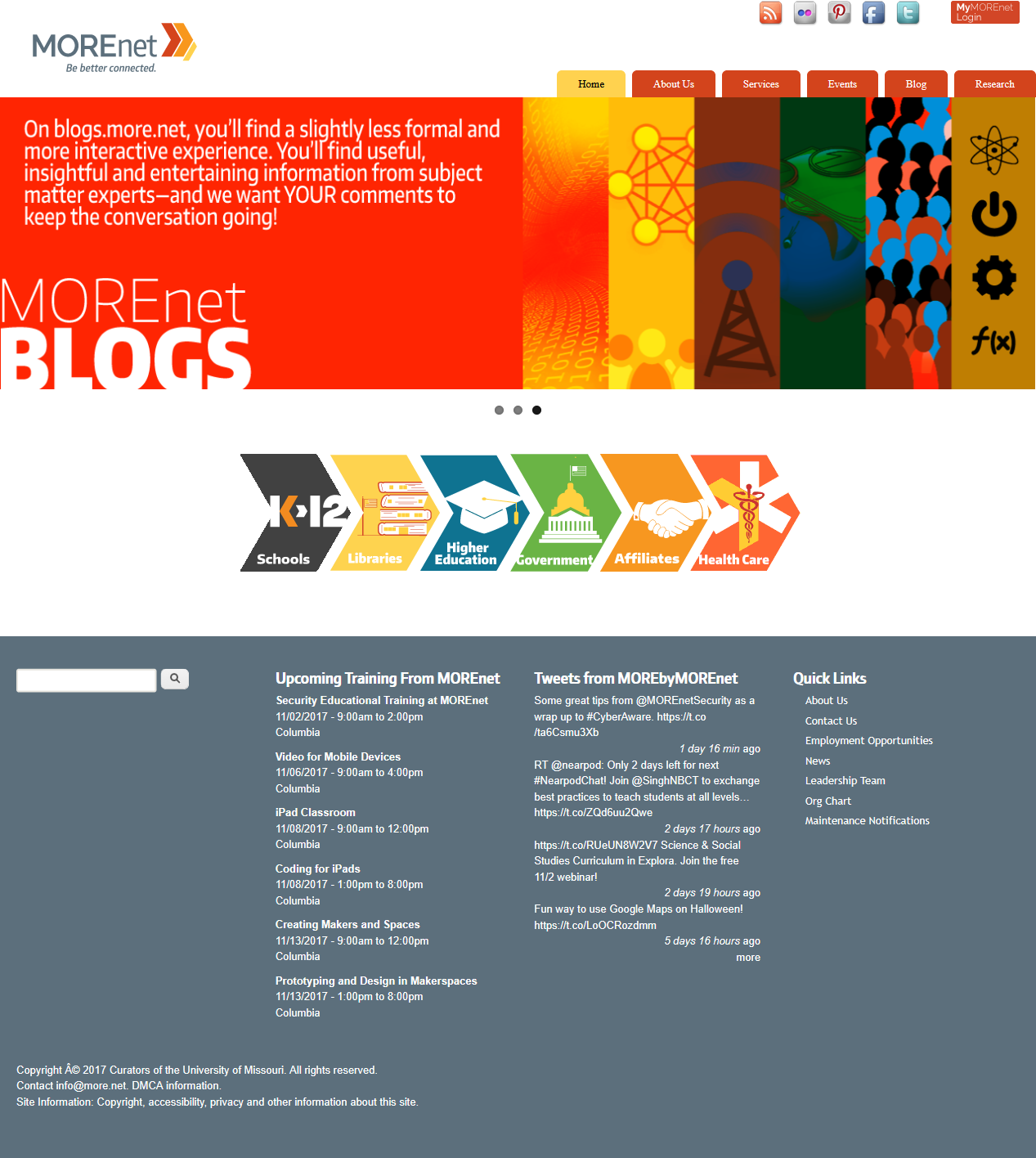 We moved to Drupal 7 in late 2014 and rebranded at the same time. Although the rebrand brought about a new logo and color scheme, it also helped us refocus on the value of having a technology partner who had an unmatched focus on academia and public sector. The rebrand was the result of extensive research conducted by an outside consulting firm that asked members how they used the site, what they wanted to find on the site and how they thought of MOREnet in general. 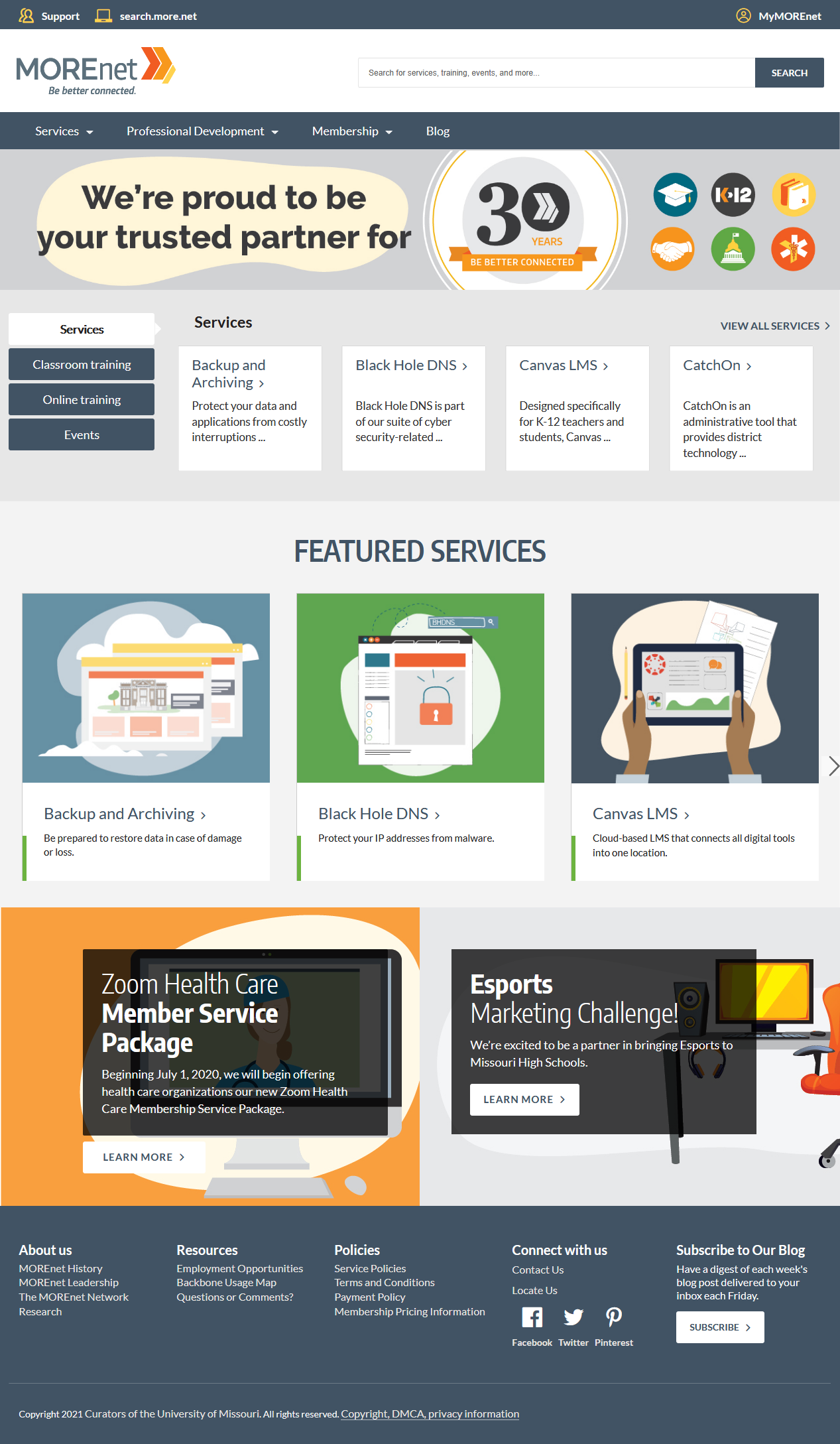 Today’s website runs in Magento, an Adobe-owned e-commerce platform written in PHP. Improvements include better search functionality, revised navigation and better integration with external systems like our training management system, Cvent. In the future, we'll continue to keep improving our web presence with relevant information and new features. We always welcome your feedback as to what you hope to find and how you use our public facing website!